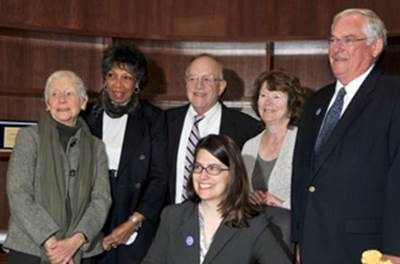 The proclamation reads:
WHEREAS, the Princeton Adult School is celebrating the 75th anniversary of providing an “evening school for adults” organized by volunteers and supported by the presidents of Princeton University and , the by-laws adopted in 1939, remarkable at that time when Princeton schools and many facilities were segregated, stated the purpose of the Princeton Adult School is “to offer to the adult residents of the Princeton area – regardless of race, color, creed, place of national origin, or sex – a variety of courses for their benefit and enjoyment,” and
WHEREAS, the first courses offered were classes in bookkeeping and boiler operations, today Microsoft Office and Investment ABC’s are among the more 200 courses –including English as a Second Language — offered in both the spring and fall terms that annually serve more than 3,800 adults, and
WHEREAS, the founders also realized that area residents wanted to be informed about current issues, they created a series of lectures by locally-based world-renowned speakers, many from Princeton University, the first of which was called “Problems and Prospects of Democracy,” a theme that has recurred often with different titles addressed by a new generation of renowned scholars and practitioners, and
WHEREAS, the Princeton Community has supported the efforts of the volunteers who run the non-profit organization for the 75 years of its existence, and
WHEREAS, on November 7, this support will be demonstrated by more than sixty local businesses that are participating in the Shop and Dine for the Princeton Adult School, an event that encourages the community to patronize these generous establishments contributing to the future work of the adult school, and
WHEREAS, Princeton Adult School should be commended for its forward-looking educations efforts for adults in our community over its 75-year history, that contributions of many individuals and institutions over the years be recognized, and that the Shop and Dine initiative by businesses and restaurants be lauded for the support it will provide for the varied programs the Princeton Adult School will continues to offer.
NOW, THEREFORE, I, Liz Lempert, Mayor of Princeton, New Jersey, along withthe Princeton Council, do hereby proclaim, the week of November 4 to 8, 2013 as

And call on all our citizens to express appreciation to the Princeton Adult School and its supporters for 75 years of outstanding services to enhance the opportunities of adults in the community to continue to learn for their benefit and enjoyment, as envisioned by its founders.
Given under my hand and seal this 28th day of October 2013.
[signed] Liz Lempert, Mayor